ROME — The national unity government of Prime Minister Mario Draghi, who restored Italy’s influence and credibility, fell apart on Wednesday, leaving the country careening toward a new season of political chaos at a critical moment when the European Union is struggling to hold together a united front against Russia and revive its economies.

After key parts of Mr. Draghi’s coalition excoriated him on the Senate floor and abandoned him in a confidence vote on Wednesday evening, the prime minister was expected to discuss his resignation Thursday for a second, and almost certainly final, time in a week with the country’s president, Sergio Mattarella.

Mr. Draghi’s departure would amount to a stinging blow to both Italy and Europe. The former European Central Bank president who helped save the euro, he used his statesmanlike stature to usher in a brief golden period for Italy after taking over as a caretaker prime minister in 2021.

He led the country out of some of the worst days of the Covid pandemic, secured and planned for the spending of billions of euros in European recovery funds, and introduced numerous overhauls of sectors of the economy that had long escaped modernization. And he was an essential part of Europe’s exceptionally unified stance against Russia’s aggression in Ukraine.

But that period of progress, unity and expanded international influence for Italy was quickly giving way to politicking as usual, as the country faced the prospect of new elections as early as October that could yield a government dominated by parties far more sympathetic to President Vladimir V. Putin of Russia and more hostile to the European Union.

Mr. Draghi’s government began to teeter last week when one of the parties in the coalition, led by the former prime minister Mr. Draghi had replaced, withheld its support on a key relief bill for rising energy costs. Mr. Draghi, determining that the unity he considered necessary to govern had lapsed, submitted his resignation, but the country’s president urged him to give it one more shot.

On Wednesday he did. Mr. Draghi made his case to Parliament, arguing that “the only way forward, if we want to stay together, is to rebuild from the top this pact, with courage, altruism and credibility.”

But the siren call of upcoming elections, which the country was scheduled to hold in any case by early next year, proved too powerful a draw on the competing parties. By the end of the day, the Senate chamber had become a rowdy theater offering previews of the vitriol of the coming campaign.

The parties did not even bother to take part in a confidence vote that Mr. Draghi had called. Mr. Draghi, for months an object of respect, suddenly on the Senate floor became target practice for the sniping of the upcoming campaign. His supporters said it revealed that Italian politics had reverted to its usual chaos, and that his time had come to move on.

“Italians are looking with dismay at their institutions, Parliament and the Senate and the political forces that basically put their own interests first and start an electoral campaign,” Enrico Letta, the leader of the Democratic Party, which supported Mr. Draghi, said on Italian television Wednesday night. “I believe that we will go to elections quickly and that Italians will choose between those who decided to sink this government and those who, beyond their own partisan interests, had opted to continue.”

The decisive blow to Mr. Draghi seemed to come not just from the Five Star Movement, the weak and splintering party that withdrew its support in last week’s vote, but also from the League party, led by the nationalist Matteo Salvini, and his center-right allies.

Mr. Salvini, an effective firebrand, had seen his support erode as he joined the governing coalition and watched as a rival right-wing leader, Giorgia Meloni, gobbled up his support from her position in the opposition. Ms. Meloni is also critical of the European Union, though she has made a point to move away from her past admiration of Russia as a defender of Christian values to strongly condemn its military aggression and support arms shipments to Ukraine. Mr. Salvini, who has had a harder time distancing himself from his public veneration of Mr. Putin, was eager to return to campaign mode to challenge her as the favorite to be Italy’s prime minister.

That seemed a long way from the morning, when Mr. Draghi, speaking to extended applause but also to some heckling, said, “Italy is strong when it knows how to be united.” He said the government’s efficiency was rooted in national unity that “was the best guarantee for a legitimate democracy.”

Mr. Draghi said that unity had allowed Italy to get out of the worst phase of the pandemic, funnel financial assistance quickly to those who needed it and cut “useless bureaucracy” that slowed the country, and had aided the growth of the economy in a deeply challenging time.

He listed key overhauls in a variety of sectors, including increased energy independence from Russia, which he called “essential for the modernization of Italy,” and noted that Italy had already received 45.9 billion euros (about $47 billion) from the European Commission in recovery funds, with €21 billion more on the way. “If we can’t show that we can spend this money well,” he said, Italy would not receive more.

“The merit of these accomplishments was yours,” he told Parliament, adding, to long applause, “I have never been as proud to be an Italian as I have been in these moments.”

He concluded by asking the parties, “Are you ready to rebuild this pact?”

By the end of the day, on the verge of a vote when negotiations had collapsed, the answer seemed to be a clear no.

Massimiliano Romeo, a senator from the League, demanded on the floor that Five Star leave the government as a condition of the center-right staying. It is “impossible to work in the interests of the country with these travel companions,” he said.

He called for a new government, without Five Star ministers, and added, with a hint of condescension, “but with you at the head, president,” because “the Italians said you should be there.”

He also suggested the Mr. Draghi pull the plug altogether and have a period of “full powers” over an upcoming budget and recovery fund spending before leading the country to early elections.

Soon after, Mr. Draghi took the floor again, this time visibly upset after the League and other parties had put impossible conditions on their continued participation and had insinuated that he overly relished his authority and vainly exaggerated the public support for his government.

Mr. Draghi slammed the door shut on motions offered by the center-right that were filled with conditions, demanding the removal of Five Star and a remaking of the government’s agenda. Instead, he said that Parliament would go forward with a confidence vote on a simple motion, whether they agreed with the unity he had sought in the morning or not.

“You are the ones who decide,” Mr. Draghi said, his voice filled with uncharacteristic ire, adding, in a rebuke to those who suggested he sought dictatorial powers, “so no requests of full powers, OK?”

In the end, the League and its allies in the center-right did not vote. Neither did Five Star, which for weeks had sought to hold the government’s survival hostage with demands and had set off the crisis last week.

Five Star, led by former Prime Minister Giuseppe Conte, whom Mr. Draghi replaced in February 2021, is riddled with warring factions and has plummeted in the polls since becoming Italy’s largest party in Parliament in the 2018 elections. The once anti-establishment party is likely to be decimated in the elections, and its rebellion under Mr. Conte, still bitter about his removal from power, was widely seen as an effort to regain some of the party’s long lost anti-establishment identity. Instead, it seems to have backfired.

“What was supposed to be Conte’s vengeance against Draghi became the self-sinking of the former prime minister, whose political limitations have emerged,” wrote Stefano Folli, a political commentator with La Repubblica. “However it ends,” Mr. Folli added, “Five Star is doomed to a marginal role.”

Thu Jul 21 , 2022
U.S. President Joe Biden has tested positive for COVID-19 and is experiencing “very mild symptoms.” In a statement on Thursday, a White House spokesperson said Biden, who is fully vaccinated and has received two booster shots, will continue to work while isolating. “Consistent with CDC guidelines, he will isolate at […] 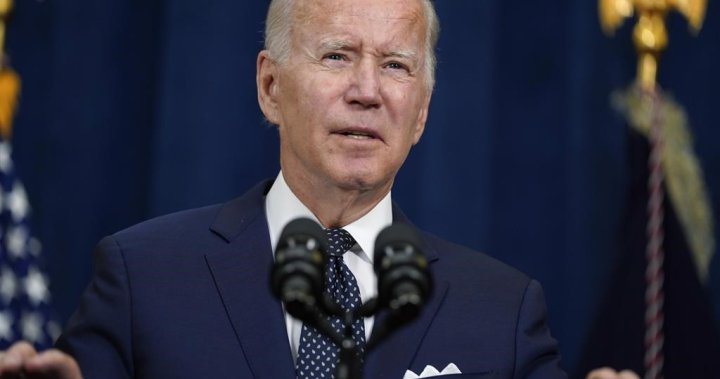