On November 8, 2017, I spent the day caring for my husband Kentucky Sen. Rand Paul as he struggled to breathe. Rand had been brutally assaulted by a Trump-hating former neighbor while he was doing yard work on our property.  He was wearing noise-canceling headphones and never saw or heard the man coming. His six broken ribs, three displaced and shattered at the ends, tortured him with each inhale.  He had developed the first of two pneumonias that damaged his lung, eventually requiring surgery. It was excruciating to see him in such terrible pain.

As I prayed, cried and tried to help him recover, a friend sent me the vicious, hateful headline from the day’s Courier-Journal: “Rand Paul a less than perfect neighbor…” This tells you everything you need to know about the bias and motivations of the Courier-Journal. Even now, more than four years later, I cannot write this without shaking in anger.

It has been a year of violent political attacks by left-wing extremists such as the shooting at mayoral candidate Craig Greenberg by former Courier-Journal writer Quintez Brown, the brutal assault on Louisville Mayor Greg Fisher at a parade, the attempted assassination of Supreme Court Justice Brett Kavanagh, ongoing terrorizing of conservative Supreme Court Justices at their homes, and the attempted stabbing just last week of New York Republican gubernatorial candidate Rep. Lee Zeldin at a political rally.

Just last week, the liberal media came after my husband again. That same Kentucky newspaper chose to prominently feature an op-ed that continues to blame Rand for the blindside attack by the felon found guilty in both civil and criminal courts, a man who admitted under oath that he had not communicated with Rand in over a decade, nor had ever had an unkind word or filed a complaint against him.  (Not that it should matter, unless like the Courier-Journal and its op-ed writers, you seek to justify violent attacks in the case of disagreements.)

The man who attacked Rand in 2017, however, had violent and graphic anti-Trump posts on his social media. The liberal newspaper’s op-ed writers omitted all of those facts, of course, in order to frame Rand as a human being somehow deserving of pain and suffering.

The writers of the op-ed not only lied about and justified Rand’s assault, but claimed that our mob attack in Washington, D.C. in 2020 was the equivalent of being “yelled at.”

There are over nine minutes of live-streamed video of the two of us being literally held hostage behind only two brave police officers as we were surrounded, spit on, threatened, pushed and splattered with liquids following President Trump’s speech at the Republican National Convention.  We were completely immobile, unable to move out of the maelstrom of hatred and threats.

FLASHBACK: SEN. RAND PAUL: MY WIFE AND I WERE ATTACKED BY A MOB — DEMS WOULD WORSEN PROBLEM BY BOWING TO RIOTERS

The police desperately radioed for reinforcement and it was only after four more officers arrived to forcibly push back the mob with bikes that we were finally able to move within their protective phalanx to safety.

This encounter has been shown on video worldwide. Yet the liberal media continues to spread demonstrably provable falsehoods in its ongoing effort to discredit people like my husband and other conservatives who don’t toe the liberal line.

So many of the liberal media outlets are everything they purport to despise. They foment rage-politics and refuse to allow a civilized airing of both sides of a debate.

They encourage juicy, false narratives of conflict that in turn stoke violence of the kind that has resulted in Rand being shot at by a far-left lunatic; weekly death threats to his office; and terrorist tactics such as fake anthrax powder and death letters sent to our home.

Even once reputable news sources like the Associated Press (AP) have lowered their journalistic standards to accommodate the woke mob, trading objectivity for partisan minimization.

After Rand and I were mobbed outside the RNC, the AP headline was:  “Rand Paul claims, without evidence, that he was mobbed in DC.” Despite literal video evidence, the AP felt compelled to write such a lie in order to minimize violence against conservatives.  Responding to the video images of a police officer nearly knocked to his feet as he pressed back against the mob, the AP described the police officer as being merely “jostled.” Downstream media outlets then repeated the lie.

The Democrats are cultivating a dangerous political environment by waging their culture war through once trusted staples of American media. Local news used to be an institution Americans trusted, but too many outlets in Democrat-run cities and elsewhere have abdicated their duty to responsible journalism and eroded that faith.”

Liberal media outlets that continue to traffic in hatred and misinformation endanger my husband, my family, and countless other people who serve in public office. And that should alarm every American.

Kelley Paul and her husband, Senator Rand Paul reside in Bowling Green, Kentucky, where they are members of Broadway United Methodist Church. She and Rand were married in 1990 and are the parents of three sons. In April 2015, Kelley published “True and Constant Friends.” In her book, Kelley celebrates the inspiration and love we receive from the women in our lives through essays about her lifelong friendships, her mother, and her grandmother, who immigrated to America from Ireland in 1929.

Kelley was the co-author of Rand’s 2019 best-selling book, “The Case Against Socialism.” On their national book tour, Kelley and Rand gave joint presentations about the book both in the national media and to audiences across the country, including such diverse venues as The Reagan Library and Columbia University.

Thu Jul 28 , 2022
Russian forces on Thursday launched massive missile strikes on Ukraine’s Kyiv and Chernihiv regions, areas that haven’t been targeted in weeks, while Ukrainian officials announced an operation to liberate an occupied region in the country’s south. Kyiv regional governor Oleksiy Kuleba said on Telegram that a settlement in the Vyshgorod […] 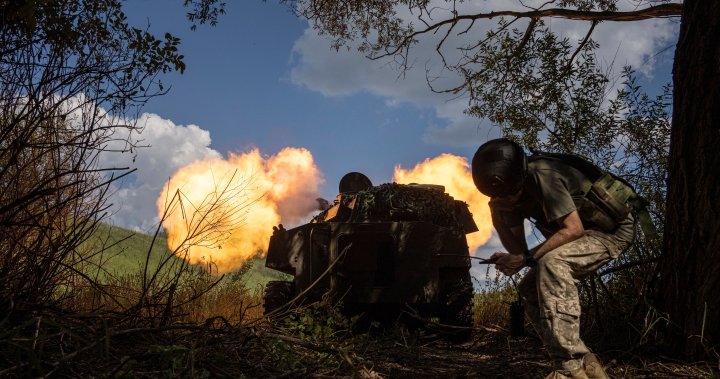