As was the case when we launched the forecast a month ago, the Deluxe version of FiveThirtyEight’s midterm model still rates the battle for control of the Senate as a “toss-up.” But within that category there’s been modest, but consistent movement toward Democrats. Their chances of winning the Senate now stand at 55 percent. That’s up from 47 percent from forecast launch on June 30. It’s also up from 40 percent in a retroactive forecast dated back to June 1. 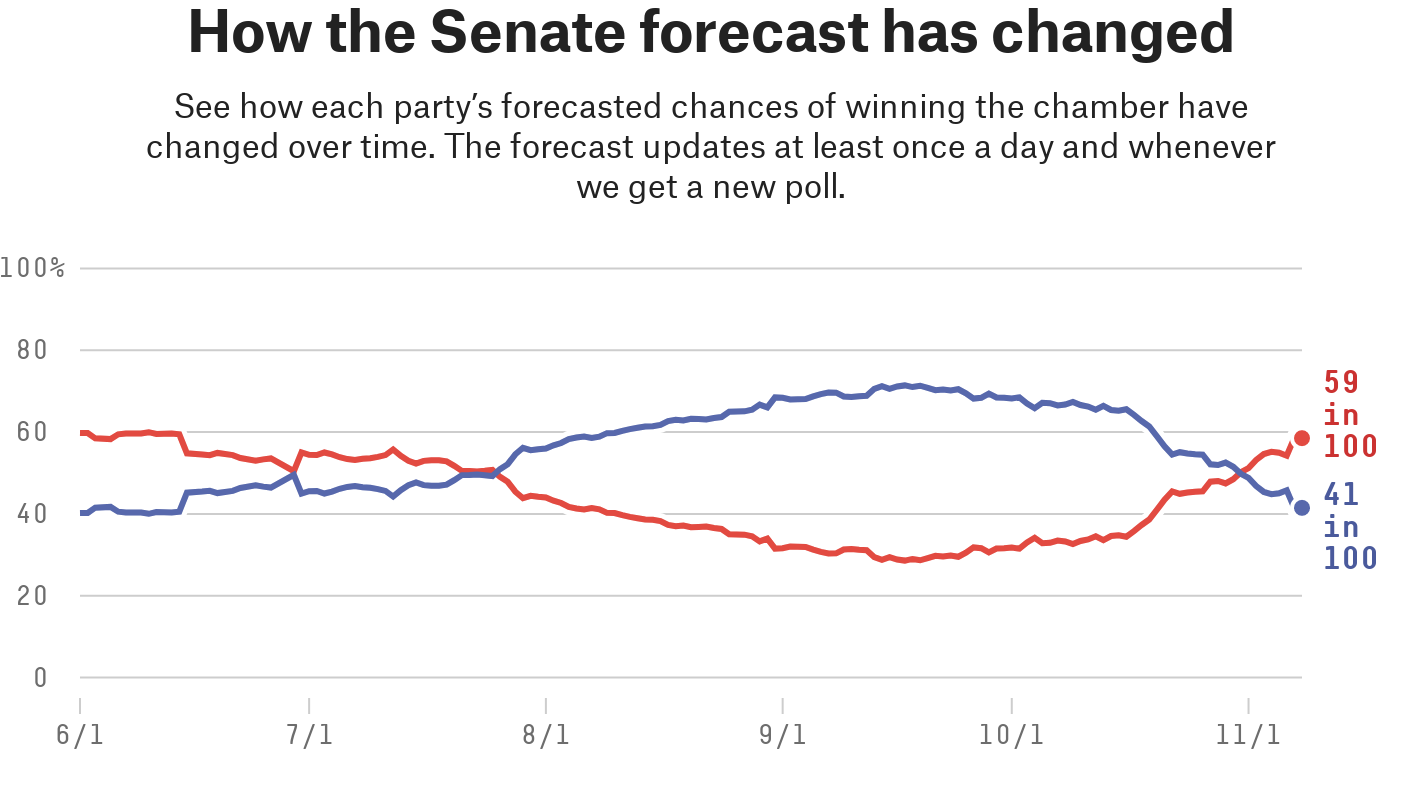 This is matched by Democrats’ improved position on the generic congressional ballot, which asks voters which party they would support in a congressional election. Democrats are now essentially tied with Republicans in our generic ballot polling average, after having trailed by 2 to 3 percentage points over most of the late spring and early summer. 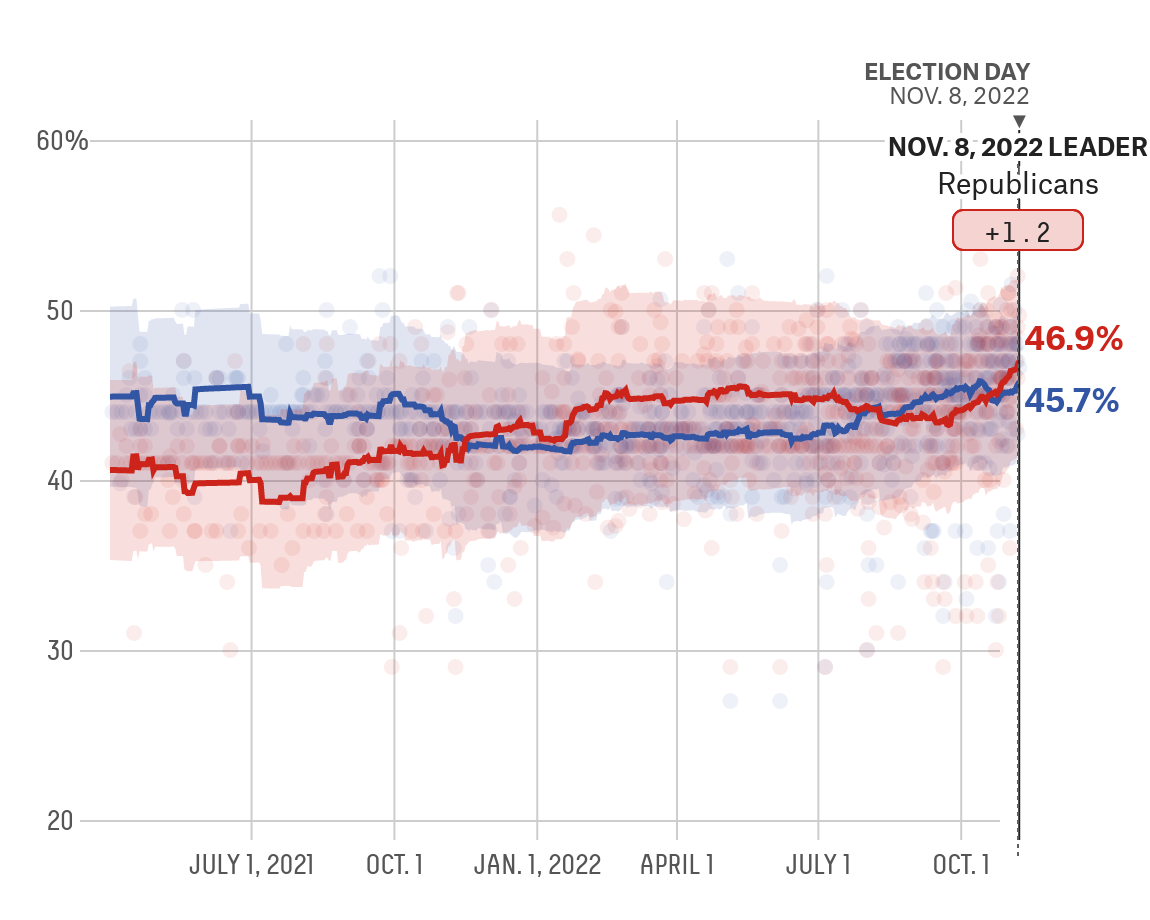 In the Classic version of our forecast — which doesn’t use the race ratings published by the Cook Political Report and other expert groups — the movement toward Democrats has also been steady. There, their chances sit at 67 percent, up from 56 percent at launch on June 30 and 52 percent in the June 1 retroactive forecast. (We discussed some of the differences between our Classic and Deluxe versions of the forecast on this week’s podcast, and it’s a theme we’ll revisit in the coming weeks.)

It’s always hard to know how much to emphasize relatively modest movement in the forecast. Sure, the difference between a 47 percent chance and a 55 percent chance might matter to a poker player (raises hand) or an options trader. But in practical terms, the story is the same, which is that the battle for Senate control is highly competitive and neither party has a clear advantage.

What would losing big in the midterms mean for Biden?

In this case, though, I think the shift is worth discussing. One reason, as I’ve discussed previously, is that our model is designed to be pretty conservative — at least at this relatively early stage of the race. It takes a fair amount of data to get the model to change its opinion in July, more so than in October. So although the shift may be modest, it probably isn’t just statistical noise.

The other reason is that there are plenty of news developments to help explain the shift; the political climate would appear to be getting better for Democrats.

The most important of these is probably the Supreme Court’s June decision to overturn Roe v. Wade. Democrats have made a fairly clear improvement in the polls since then. And although abortion may not be as important to voters as the economy, it did rank as the second-most-important issue in this week’s Suffolk/USA Today poll.

That’s not the only factor working in Democrats’ favor, though. Consider:

I do buy that Dems’ energizing over abortion evens midterms equation: Silver

There are a lot of “ifs” here. Economists are unsure about what to expect with inflation going forward; the next COVID-19 variant could be more deadly; there are still a lot of hurdles to clear in the Democratic legislative progress (*cough* Sen. Kyrsten Sinema *cough*); and Democrats may not be able to sustain the same level of attention currently given to abortion and the Jan. 6 hearings. Plus, Biden’s approval rating remains terrible to the point where even most Democrats say they want a different presidential nominee in 2024. But ultimately, Democrats have a lot of outs to a winning hand in the Senate, even if they’re drawing thin in the House.

Sat Jul 30 , 2022
As Pope Francis travelled across Canada, so did a demand to revisit centuries-old declarations. At the front of a basilica in Quebec, where the 85-year-old pontiff prepared to preside over mass, Sarain Fox and her cousin stood in silence, holding a banner with the words “Rescind the Doctrine” emblazoned in […] 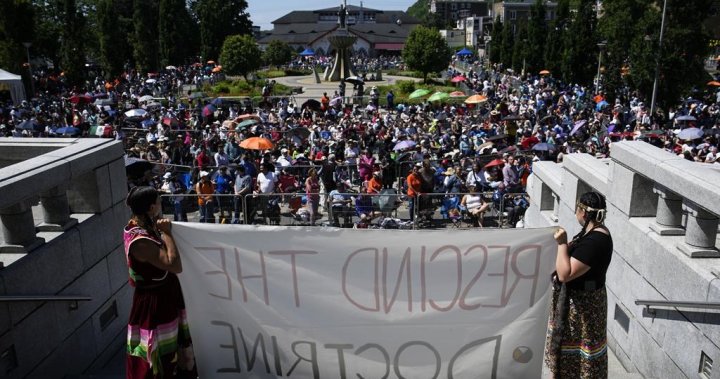